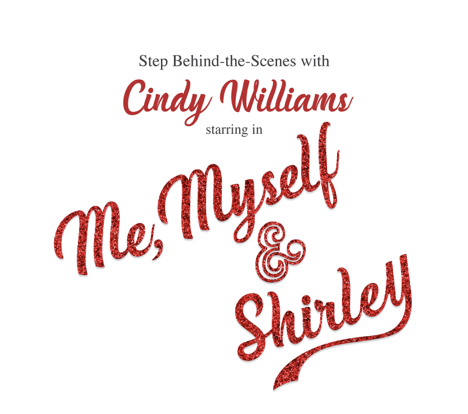 Best known for her iconic role as Shirley Feeney in the hit television series, “Laverne & Shirley,” Cindy Williams is a versatile actress and comedienne who overcame a challenging childhood to pursue her love of acting and found stardom. Cindy shares her memories and hilarious backstage tales in “Me, Myself & Shirley” covering a lifetime in entertainment. Her storied career includes working with Oscar-winning directors Francis Ford Coppola, George Lucas, George Cukor, Roger Corman, and Jack Nicholson, in several films including two nominated for the Best Picture Oscar: “American Graffiti” and “The Conversation”. Her friends and co-stars include Penny Marshall, Ron Howard, Harrison Ford, Henry Winkler, Richard Dreyfus, Gene Hackman, Dame Maggie Smith, and Robert Duval. Come hear the stories, the secrets, the embarrassing moments, and the highs and lows of Cindy’s life in Hollywood, (and maybe relive a favorite scene or two)!

“A laugh-packed, 90-minute show! 'Me, Myself & Shirley' is a delightful, nostalgic and very funny one-woman performance.”

My Mother’s Italian My Father’s Jewish & The Therapy Continues!

When the family travels home for a winter visit, Steve is thrown together with all his dysfunctional kin in a riotous celebration of the season. We all get to attend a family dinner at Grandma's where, if you're under 55 you still sit at the children's table, and thirty-five over-fed people share one toilet!